Usually silicon is considered as the material of choice for systems operating in the Middle Infrared (MIR) region, from 3 to 5 µm. But in fact the material may be used in much broader operating range - from 1.2  µm to 1000  µm or even higher.

Three grades of silicon are produced to optimize transmission in the operation wavelength region: Optical Czochralski Silicon (OCz-Si), Float Zone Silicon (FZ-Si), and High Resistivity Float Zone Silicon (HRFZ-Si). The choice of these grades depends on the wavelength range, element thickness and specific application. We use crystals of appropriate grade (i.e. production technology, conductivity type, and resistance) to guarantee the best transmittance. Main principles of proper material choice are described and demonstrated below. Also note that the transmittance does not depend on the crystal orientation.

In Fig.1 transmission spectra in NIR (Near Infrared) and MIR ranges are shown. One can see that in 3 to 5 µm range practically there is no difference in transmission of materials of all used grades and resistances. Also, all grades have phonon absorption peaks stipulated by lattice absorption in the 6.5 to 25 µm range. OCz-Si has additional peaks at 5.8 µm, 9.1 µm, and 19.4 µm induced by Oxygen vibration absorption. Due to much less Oxygen concentration (10E16 cm-3 vs. about 10E18 cm-3 in OCz-Si) FZ-Si is free of Oxygen peaks and can be used for more critical applications. 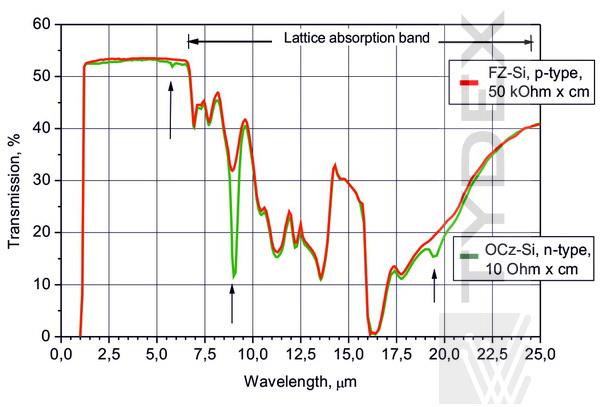 Lattice absorption, as well as Oxygen absorption, depends on the optical pass of radiation inside the element (roughly on element thickness). It does not depend on resistance. Therefore, thickness is a very critical parameter for silicon usage in the range of 6 - 25  µm. In Fig. 2 the transmission spectra for several thickness values are shown. One can see that in the 3-5 µm range, typically used in pyrometry and thermography, (and even to 6.5 µm) the transmittance dependence on thickness is not substantial. For longer wavelengths absorption becomes significant and transmission is strongly affected by thickness. For 5 mm thick OCz-Si sample average transmission over the 8-10 mm band is less than 32% (for FZ-Si - about 38%) and only 18% over the 10-14 µm band (the same for both OCz-Si and FZ-Si).

However silicon windows with thickness less or about 1 mm can also be successfully used in the second "atmosphere window" 7-14 µm. In this range average transmission of a OCz-Si window with thickness 0.5 mm exceeds 51%, and for FZ-Si it is a bit higher (about 51.9%) due to absence of the Oxygen absorption line. 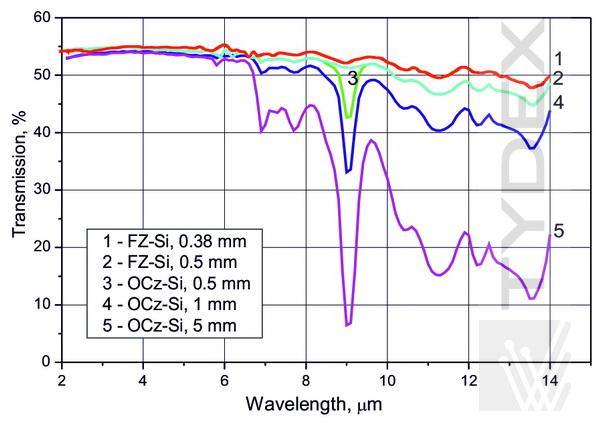 Figure 2. Transmission of OCz-Si and FZ-Si with respect to thickness.

Transmission in Far Infrared spectral region is shown in Fig. 3. We note here that starting at 21 µm there is no difference in transmission between FZ-Si and OCz-Si with equal resistance and conductivity type. For such applications (50 µm and more) Tydex offers HRFZ-Si maintaining 50-54% transmission to 1000 µm (and for longer wavelengths on custom request). Materials with the resistance to 30 kOhm x cm are available. 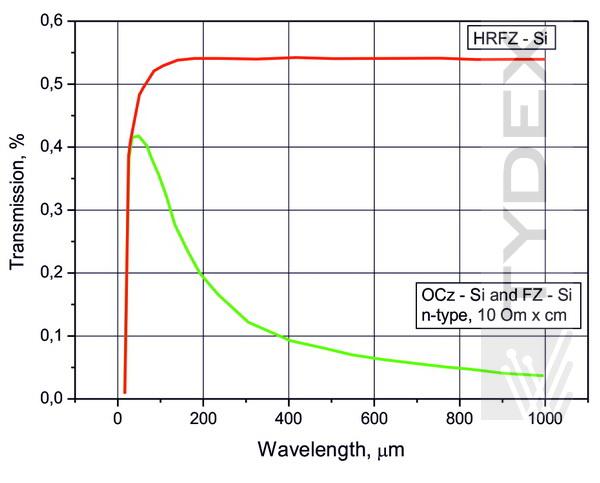 Maximal dimensions for crystals used for the optics production are as follows:

According to the formula